Break the Ice: Get Hooked on Hockey and Own Your Game

A complete 101 to getting the puck sliding on your hockey game.

A Commitment to Locally Made Cycling Gear

From cycling pedal straps to messenger, camera and laptop bags, Toronto’s YNOT Cycle has evolved. The company’s founders and passionate staff credit that growth to its commitment to locally made, uncompromisingly high quality goods that have developed a loyal following in Toronto – and beyond.

Angella Goran has spent over 15 years as an amateur to elite rower, cyclist, – and currently – triathelete, as well as being a certified top-level indoor cycling instructor. She is the founder of SokJok Inc. and Cheer 4 Me, a new charity set to launch in 2015. The two charities work hand-in-hand, using proceeds from sock sales to support sustainable leadership programs for youth programs in schools, teams and organizations.

Moisture-Wicking Fabrics: How They Stack-Up

AHAALiving.com’s Malina Kaija teams up with the powerhouses at Toronto’s Thrive Fit to put three different moisture-wicking performance tops through the ultimate sweat-test. 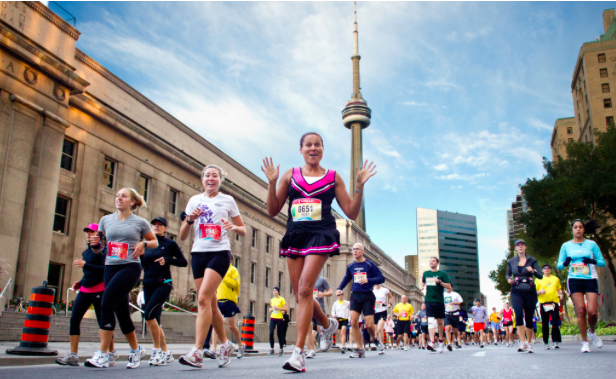 Marathon with a Mission

In Toronto and need some #BestAugustEver inspiration? Join the Sustainability Network in running Scotiabank Waterfront Marathon (or Half Marathon or 5K races). You’ll be doing good for the planet, as well as yourself!

Don’t toss the gummy worms: Reaching your goals, one at a time There’s a middle ground between overtraining and lying around on the couch. Active recovery keeps elite athletes at the top of their game, but it’s an important protocol for those who train hard in any sport.

Some things need little to no introduction; the video we posted in this blog entry (and really think you should watch) is one of those phenomena.

For the sake of good old-fashioned chivalry, we’ll do a super speedy intro: Tom van Steenbergen is a mountain biker extraordinaire and the course at Whistler Mountain Bike Park just opened on May 16th.

Off to the Races!

The guy who put Ironman triathlons on the map in North America and really helped popularize endurance sports for the masses, was Graham Fraser. As race and event director of some of the biggest triathlons in North America, Fraser has seen it all. However, what gave him the greatest feeling of pride and happiness was seeing a local person, usually at first non-athlete, who had progressed from volunteering, to being a Volunteer Captain, to doing her first triathlon, to one day, finishing an Ironman.